One man makes a big difference by finding his purpose and going the distance. 100 miles in 24 hours in the name of cancer. He's calling it "Rollerblade for Cancer Aid." 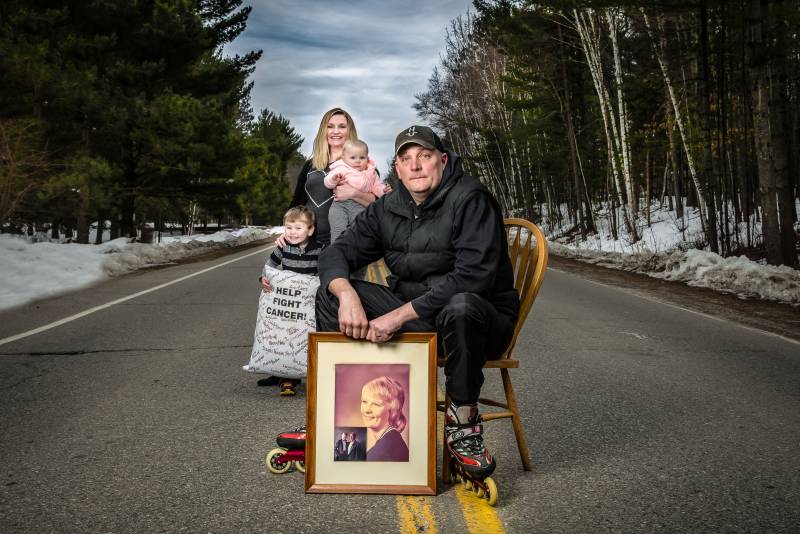 My name is Phillip Hermel, and by most accounts I am a very average, everyday person. From the outside looking in it seems like I have a pretty normal life. I have a beautiful wife and two wonderful children. I am a school teacher and live in a small town in northern Minnesota. What people don't know is that I live with a pretty heavy "backpack" on my shoulders that haunts me daily. Many people have their own "backpacks" that hold them down, yet mine is filled with the pain of loss. This is something that I have had to live with my whole life. The only way that I can seem to tolerate it is to fight the thing that stole so much from me and my father. This fight helps me get through most days. It feels like it is my purpose.

Shortly after I was born my mother was diagnosed with a malignant brain tumor. My mother was a beautiful, hard-working, hilarious woman. Her name was Cindy (Worrath) Hermel. Unfortunately, I only have a few memories with my mother because she lost her battle with cancer when I was five years old. Now that I am a parent I can't imagine having to say goodbye to my children for a last time, especially at such a young age. I often think of my mother's battle and the fact that she had understood that cancer would take her life. Honestly, this infuriates me, and this is why I want to help others who are currently battling cancer. Cancer took my mother. I never got to have a long talk with my mom, no birthday parties after the age of five, no dating suggestions, no career advice, no mom. She never got to be a grandmother to her grandchildren. For this reason I will forever hate cancer and will fight for those who have it.

My father, Edward Hermel, was left with a five year old boy and had just lost the love of his life when he was only 30 years old himself. I feel that he had no way to cope with this enormous pain that was thrown in his lap. Due to a bet from a softball buddy, my father attempted his first marathon after my mother's death. Shortly after he finished he came up with a plan. Where this idea stemmed from I will never know. He was going to personally do what he could to fight cancer. For his next 29 marathons he would ask people to donate money to his cause, and if he finished he would donate that money to an organization dedicated to fighting cancer. Although, if he didn't finish he would double their original bet and give it back to the person who donated the money. Needless to say, my father didn't look like the traditional marathoner, he looked more like a football lineman. Most of his bets were made in a bar as he drank his Budweiser and puffed on a Marlboro. Of the 30 marathons my father started, he finished every single one of them. He raised thousands and thousands of dollars for cancer research. This was my father's therapy. He always told me to never give up. He instilled in me that anyone can make a difference in this world, you just need drive. My father passed away two years ago and I try to continue his legacy. He is one of the driving forces behind this summer's fundraiser.

You might be wondering where this article is leading? In 2008 I did a fundraiser for a cause that consisted of me rollerblading 100 miles in one day. When I finished that journey I told myself that I would never do anything like this again. It was hell and I struggled to finish. I never thought of lacing up the rollerblades again until the summer of 2016 when I stopped at a gas station and ran into a person I knew and we started a conversation about my 2008 rollerblading journey. He told me that he was just telling another gentleman about it and how great it was. I was feeling pretty good about myself until he ended our conversation with, "Well, that was a pretty neat fundraiser, but you could never do that today." When I returned to my wife in the car I told her that during the summer of 2018 I was going to do another 100 mile fundraiser. She was not thrilled.

After much thought and consideration the idea was clear, "Rollerblade for Cancer Aid" was born. I knew I wanted to help those who needed help. I partnered up with an amazing group that founded the Itasca Area Cancer Crisis Fund (IACCF). I had worked with this group when a friend of mine needed help and was battling cancer. These people are simply amazing and have donated over $220,000 to those in need. The route was chosen, now I needed a finish line, literally. With the help of my friends and an amazing community we're going to make it happen! 100 miles in 24 hours.

This is my way of taking a shot back at cancer; my therapy. Cancer took a large part of my life away from me and I feel this is my way of helping others. In this journey I urge others to find something that brings them purpose, something that gives back, brings hope and... people together. Help me help those who need help. Let's fight cancer!

Phill will be making the trek and arrival on August 4th at 7pm at the the Tall Timber Days in Grand Rapids, MN. If you are interested in donating or curious how to get involved, visit the Go Fund Me page