STARTING OUT AS A BIRTHDAY PARTY FOR DULUTH LOCAL SCOTT LUNT, THE FIRST HOMEGROWN MUSIC FESTIVAL  WAS A COUPLE OF BANDS; FRIENDS OF SCOTT. THE FESTIVAL HAS NOW GROWN TO A FULL-FLEDGED EIGHT DAY FESTIVAL WITH ALMOST 200 BANDS, OVER THE YEARS INCLUDING RENOWNED ACTS LIKE LOW, TRAMPLED BY TURTLES, CHARLIE PARR, GAELYNN LEA, HALEY (BONAR), AND MORE. TAKING PLACE APRIL 29TH - MAY 6TH, THE FESTIVAL WILL CELEBRATE ITS 20TH ANNIVERSARY THIS YEAR. ON TOP OF THE MUSIC, THE FESTIVAL WILL INCLUDE A CHILDREN'S MUSIC SHOWCASE, POETRY, AND ART. I SPOKE WITH EXECUTIVE DIRECTOR, MELISSA LA TOUR ABOUT THE UPCOMING EVENT. 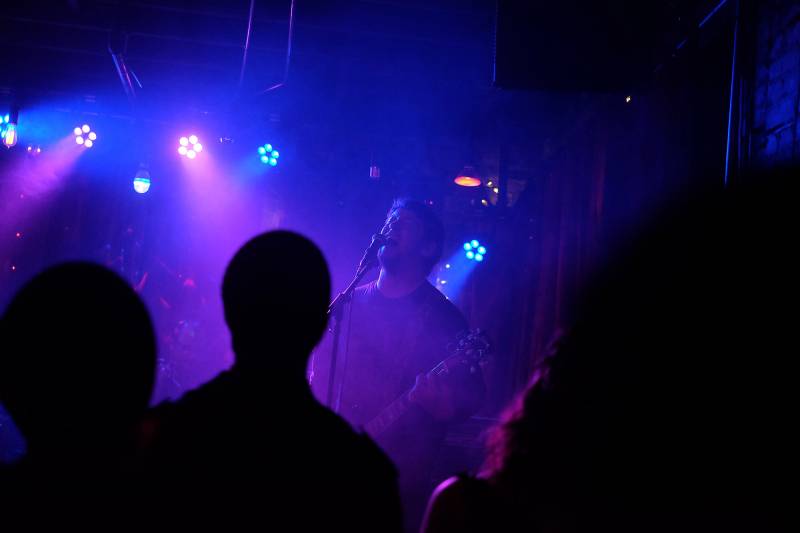 How do the bands get to play this festival? Can anyone register?

Anyone local. That's the big thing.

How is 'local' defined?

We would define it as a little looser in structure but it's usually the Arrowhead Region. Some people have relocated, Mary Bue is one of them. She still has very strong ties; she still comes here to tour so we take that into consideration as well. But somebody applying from Kansas City that doesn't have any ties here would not get in. We get a lot of people whose promotional people reach out to us and are blown away by the fact that we can support an eight day festival with 200 local acts. They just can't believe that we aren't reaching out to national people.

What's the mission of the festival?

To have the community feel, promote something that is local and homegrown, just like the name says. It's the community buy-in; you have local businesses and the citizens that volunteer every year.

How many volunteers do you get each year?

About 200, depending on what we have going on. Like when we had the [Trampled by] Turtles for the festival, we had to staff very heavily for that. But it's usually between 150-200 volunteers. Return rate for volunteers is about 90% every year. The only times we don't get a repeat [of volunteers] is if there was a death or somebody relocates for college. Really we have a very easy time getting those volunteers because it has such rewarding benefits. Those volunteers get a week-long pass and a t-shirt so they feel bought into the festival.

700 artists [including various collaborations]. We do [put a cap]. I think for the last three years
we've had anywhere from 300-350 bands/performers apply, and we have under 200 spots. We have a little bit of leverage where we can go from three acts per venue up to four or five if we need to for space, but we don't like it to be too long at any one venue either because we want people to move around.

How many people attend?

About 5,000 people not counting volunteers, so the venues are packed. The last few years we've had growing pains; we're growing out of a lot of venues. It is what it is. We try to tell people if there is someone you're dying to see, don't wait until they're already on stage; you need to get there beforehand or you're going to be standing outside. It's just what it is. I've seen crowds, especially if Low is playing or somebody very well known, where people get discouraged if they're outside waiting to get in, I'll go out there and say, 'You know what? One of my favorite things about the festival was that I saw so many bands from Duluth that I'd never even seen.' [The exploration experience] is probably the best part of it.

How many venues are involved?

All in downtown Duluth?

No, the opening Sunday is just downtown at three or four venues. We do the Mayor's proclamation there as well, which this year is at Hoops Brewing. Tuesday we have Canal Park night where everything is there and downtown. Wednesday is West Duluth, Thursday is Souptown night over in Superior, and Friday and Saturday are when most of the venues are doing something. We try to incorporate the different neighborhoods all around town. Then in April we do an Iron Range Invasion and we also do a Twin Cities Invasion.

How would you describe the Duluth music scene?

On a general basis, it's very well covered as far as genres go. People always joke that this is a 'banjo town,' and it's true! We have a lot of banjo music. But there is a lot of stuff out there to be had.

At the festival - bluegrass, metal, rock, rap, and hip hop - are they all represented?

We have done some jazz over the past. There aren't too many jazz bands right now that have applied recently. Same with reggae. But we try to get a little bit of everything.

How many bands perform each day?

On the weekends we probably have 60 or so play each day. And then it's less during the rest of the week.

The festival has incorporated a children's music showcase. Tell us about that.

There is music there, but it's interactive, so it's a lot of stuff: local yoga instructors, local Zumba, the Zenith Hoops collective is going to be there, we've had robots, face painting, and it's all free for
the community, which is the huge part. We've received grant funding for half of that from the Duluth Superior Area Community Foundation for the second year now. [The Children's Showcase is] the first Sunday of the festival at 2pm at the Children's Museum. About 250 people showed up to the first year; up to 1,500 last year. And it was people from all different neighborhoods; so you saw Lincoln Park, West Duluth, Morgan Park, Central Hillside; it was really cool. We're expecting at least 3,000 this year.

For someone who's never been to the Homegrown Music Festival, describe how the downtown transforms and how it all works.

On the Friday and Saturday festival in Duluth, we have the trolley that runs all along Superior and goes down Michigan so you don't have to drive. You can just hop on every 15-20 minutes and get to the next venue. That was so popular over the last several years. We get that donated to us from the Greater Downtown Council in Duluth. Then we added the trolley for Superior on the Thursday Souptown night. And it's free so people don't have to pay to get on the trolley.

People are friendly. We have very little if any law-breaking, so it's very courteous. People are more than happy to help others navigate around if they don't know what they're doing.

How much of the 5,000 expected attendees would you guess to be local?

Probably 80% and then returning locals.

How do attendees know the schedule of events for the festival?

The field guide is our overview of the festival - it's about 100 pages of everything from band bios to the advertising that people buy. There's always the 'Happy Birthday Scott' letter in the beginning, that, you know, is kind of a campy funny thing. The cover is going to be done by Chris Monroe [cartoonist in Duluth], who did our first Homegrown cover, so we're really excited about that. And then inside it has the overview of who is playing and what their music kind of sounds like. We have different writers who put a bio together, we don't let the bands do that. We want that to be subjective and fun. It will also list the all-age venues, the 18+ venues, etc.

We put those out everywhere from the Duluth/Superior area, the Iron Range, and we have a crew that disperses them down in the Cities.

Any fun festivities for the 20th anniversary you could share with us?

We are looking at doing a few things. We wanted to get into the NorShor [Theater] for the reunion so we're doing poetry there. We still have some things in the works that I can't even hint at...

If people wanted to be involved in next year's festival, how would they go about doing that?

PrevShedding Light Where There is Darkness
NextFINDING PURPOSE IN LOSS & HEARTBREAK